How much to pay your fund manager?

An individual wants to invest his hard earned money in a fund seeking good returns on a long term basis. Now there are different kinds of fee structure that he can opt for including fixed fee, profit sharing or a mixture of both. How to go about evaluating the efficiency of these structures?
A rational client would ideally want his manager to work very hard and do the best he can and at the same time charge no fee at all. Of course the manager would not be so eager to manage the capital of such a client.  Hence the client has to take the manager’s perspective into account while negotiating for the best fee structure.
By altering the fee structure the client attempts at maximizing his net returns (Returns from investment – Fee he pays). At the same time, for a fee structure chosen by the client, manager attempts at maximizing his own returns (Fee he receives - cost of effort he put in).

Mathematically this problem can be formulated as following:
Client’s Perspective:
Find F(R) such that [R-F(R)] is maximized. Here F(R) is the opted fee structure which is a function of returns R. Here R is based on the performance of manager.
Manager’s Perspective:
Find E such that [U(F(R(E)))-C(E)] is maximized. Here E is the efforts put in by the manger. This effort would translate into R, returns on investment for client. Based on these returns the client would pay manager some fee, F. This fee would have some utility, U, for manager. C is the cost of effort the manager is putting in to achieve the returns.

Following is the sample mappings of these variables.

Here Kfr is the fixed fee percentage. Typical values are 0.5-5%. After calculating, the optimal effort for the mangers comes out to be zero. Client net returns would be (–Kfr). In real life situations, given a fixed fee structure the manager chooses to do the minimum work required to retain the client. This situation is clearly not favorable for the client.

Here Kfr is the profit-sharing percentage. The typical values will lie between 10%-50%. As we can see that in a profit sharing framework there is a nonzero effort the manager would put in. This situation is better for both the client and the manager (for certain values of Kfr) when compared with case 1. 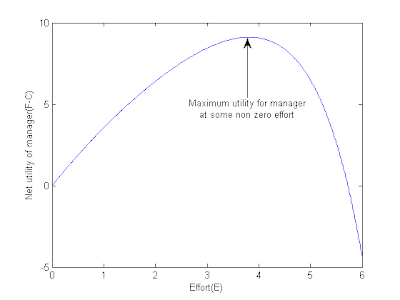 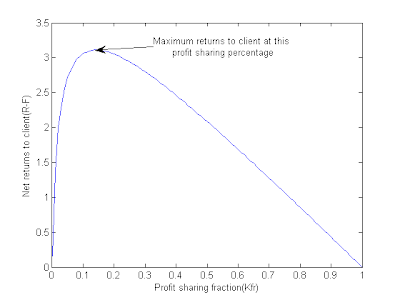 This leads to two distinct types of behavior that mangers would exhibit.  The manager either chooses to do no work and still charge the fixed fee component (Kfr*Rlb). Or he chooses to do non zero effort so as to benefit from the variable fee component. The actual behavior depends on the exact value of Kfr and Rlb. 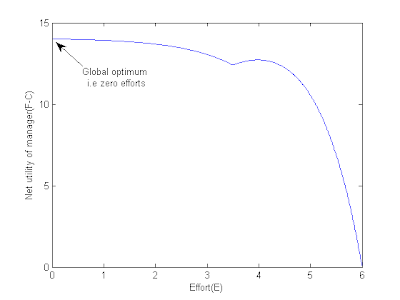 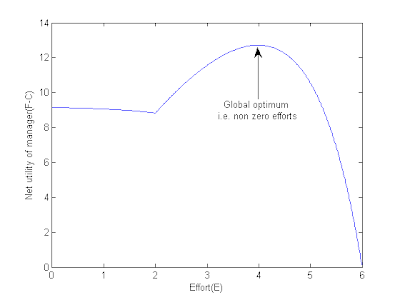 Conclusion:
Based on the above analysis the client should keep the following points in mind before deciding on the structure: